We booked a guided tour with a local guide through the township of Knysna via Peggy`s Art + Tours. Poloko / PK , a young man, guided us through the “other” Africa. Approx 47,000 of Knysna`s 68,000 inhabitants live here in mostly poor conditions.

One township section is inhabited by black Africans and one by colored Africans (Colored People). Unemployment is extremely high and alcohol consumption is a major problem. Government housing projects (Mandela House) offer houses for South Africans, but these are subject to conditions (e.g. income limits). Sometimes there are long waiting lists. As far as we understand, people only have to pay for electricity. Many people in the township live in self-built huts made of wood and corrugated iron, which are miniature and offer little privacy. Only the toilet is partitioned off. “Showers” are taken one after the other in the washing tub. 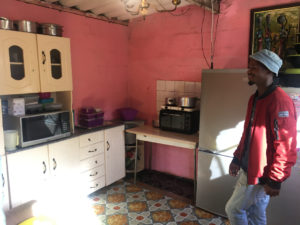 A fire destroyed many of these shelters in 2017. The township has schools, a hospital, a fire department, … it’s almost a city within a city. There are also police officers living there. However, according to the PK, a separate guard is not necessary, since disagreements are settled among themselves and there are something like local community spokesmen who keep order in the neighborhoods. Fences are only used by those who are richer and where property must be protected. In the small corner shops, if necessary, a tomato can be bought individually and written to at the end of the month. 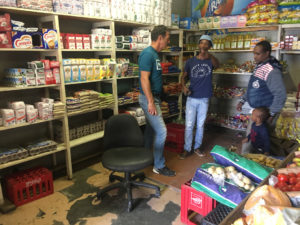 We bought a big box of cookies and then went to a preschool for young children sponsored by Peggy, an artist and store owner who sadly recently passed away. The children are currently being cared for in a church hall because the container, which was already finished, could not yet be placed in its intended location. 33 children can learn, eat and play there. Peggy had always sponsored 50% of her income for this project, hopefully a solution can be found for the future. PK told us that most of the parents of these children are still children themselves and while the little ones are being cared for, they go to school themselves. 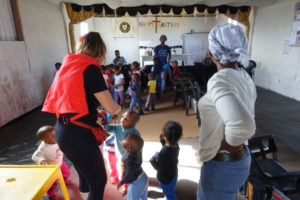 Life in the township is mostly hard or poor, but people make the best of it and many live here consciously because they have their roots here and to be useful to the community. After the tour we went back to “white” Africa , to Thesens Island and had lunch in a restaurant overlooking the lagoon. Afterwards we visited Buffalo Bay Beach, a wide sandy beach with an imposing rock in the water. On the way back we noticed a turtle on the shoulder. A local resident said she knew the animal and carried it to an adjacent garden. In the evening we had barbecue again, because it tasted so good yesterday.