We rented a car with driver for one day. The very nice driver drove us over the winter palace of Bogd Kahn and the Dsaisan memorial (on a hill in the south of the city), to the National Park Terelj. From UB (Ulan Bator) to the huge Genghis Khan statue about 54 km away. The equestrian statue, which is about 30 m high on a pedestal, is 10 years old and arguably the tallest equestrian statue in the world. We reached the head of the horse by an elevator and a few stairs, from where you have a magnificent view of the Mongolian steppe. 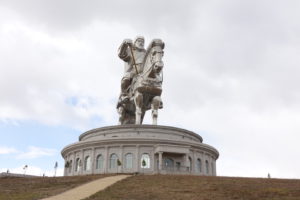 Then we went to Turtle Rock, which honors its name! The stairs to the Ariyabal Meditation Temple have also paid off. The temple is built on a steep slope and has the shape of an elephant head. The 108 steps simbolize the trunk. 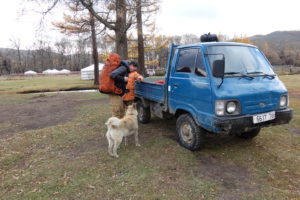 After that, the adventure started! A young man picked us up at a meeting point where we were to take the bus back to UB the next day. The riverbed had to be crossed on foot over bridges and balancing over tree trunks. In an all-terrain vehicle we sat in front three and drove through deep streams, cross-country through the mountains to the yurts (Mongolian "Ger") of the nomadic family. Reiner and I got a yurt for us, with a coal oven in the middle (which our family had cheered on us well, but which was cold in the morning), a table, a washbasin and four beds in it. No running water, electricity for light is generated with solar cells on car batteries. To the toilet one had to walk behind a wooden shed about 25 m away. In the second Ger, the young family slept with the young child. 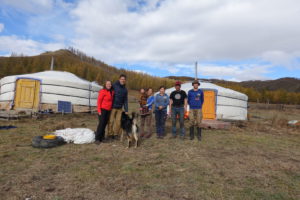 Everyone was very friendly! We were the only visitors there and there were still the grandma and the grandpa, aunt and uncle for dinner. The young woman spoke a few words of English and otherwise we took "hands and feet" and actually took the picture dictionary to talk to grandma and toddler. We got traditional milk tea and delicious pastries (like radar cakes) with homemade butter and it was probably cooked a vegetarian noodle soup with vegetables especially because of me! I was also allowed to take a snab. After a cool night, but thanks to padded jackets, sleeping bag and provided blankets, we slept quite warm again, there was tea water and the pastry in our yurt. 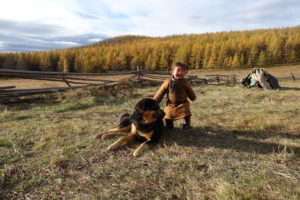 The family members then built on another yurt and installed, among other things, an antenna for a phone! Reiner and I couldn't help much and climbed on a small hike to the next mountain – insane view! Then the uncle and the young man drove the horses in and saddled one for Reiner! Reiner also ventured for a while! The uncle took us back to the bus stop. Horses, cows and yak graze on the pastures all around! There are no fences or linen! 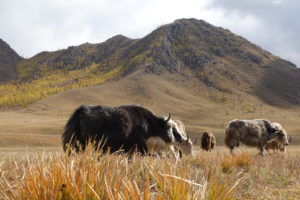 The bus arrived on time at 2 o'clock PM and was actually already full! But the driver has strapped our backpacks onto the roof and everyone should come together a bit! The first 30 km we drove with 25 people in a large taxi (I at Reiner on the lap) towards Ulan Bator. The last 30 km we changed to a bigger bus and landed at the hotel again at about 18:00.

Mongolia could definitely have been a few days longer!