Today we rented bikes for one day and took a tour to the Tibetan Buddhist monastery Ganden Sumtseling (at about 3320 m altitude)! We cycled there in less than an hour, with no bike lanes and you have to drive on the road.The last piece we did not smell the wheels and had to take the shuttle bus to the entrance gate. The bus is included in the ticket (115 yuan). The large prayer halls with the golden roofs and various large Budda and God figures can be reached via a long staircase. The monastery was built in 1679 from the 5th century. Dalai Lama. 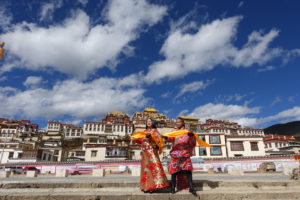 A couple in costume had just taken pictures. The small lake in front of the temple town, lamuyangcuo Lake, is surrounded by a walking path, partly above the water, on wooden paths. It’s very nice to go there. It takes about 45 min to do so. There are some photopoints and there are a lot of yaks and black pigs running around. Yaks, pigs and wild dogs generally run through the area! 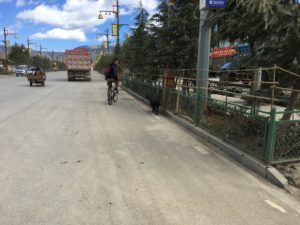