From 8:00 am we rented a car today to go to Tierra del Fuego! So at just after 7:00 we took a cab to the Car Rental Station at the airport. SUV with four-wheel drive to get ahead on the dirt roads at the “end of the world”. We barely caught the ferry to Porvenir at 9:00, as we had to buy tickets in the terminal beforehand. The approximately 32 km ferry crossing the Maggelan Strait took 2 h. We had our breakfast sandwiches and coffee in the SB restaurant on the ship. 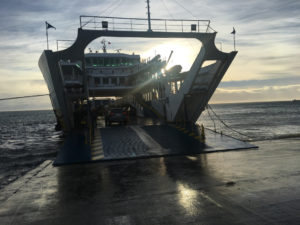 From Porvenir it went “offroad” good 2 h over Tierra del Fuego through the “Region de Magallanes” to the “Parque Pinguino Rey” . There is the only king penguin colony in South America. So far “north!” one does not meet them otherwise. The penguins are very well protected. They were standing together in a group on a dune behind a small river. The guide called it a penguin pool. But nobody felt like bathing right now. It was very stormy, so the wooden fence also served as a windbreak. Since the penguins are nevertheless somewhat further away, several binoculars are built up, by which one can observe them very well. 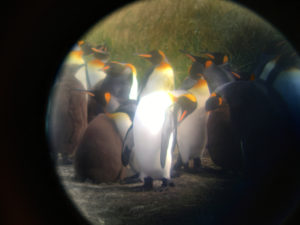 The gray Thick Puffs are the offspring, some only a few days to weeks old! Very cute and sociable. The penguins have resettled in this place only a few years ago. However, about 500 years old penguin bones were excavated, so the “place” was probably used as a colony once before. 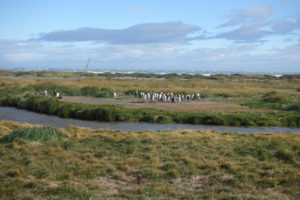 After 1.5 h “penguin watching” we were well blown through and drove our car further across the island. The vegetation here consists almost exclusively of grassland. Very few people live in this part of the country. At the ferry dock to Punta Delgada a somewhat smaller ferry commutes. We were lucky and it just arrived. A cheeky fox was hanging around the pier looking for goodies. We also saw many guanacos, nandus (large ratites), and wild geese along the way. In the evening Reiner dropped me off at the new lodging and brought the car back. At 21:00 we had frozen vegetables au gratin.