This morning we started into the Etosha National Park. At Andersson’s Gate we started our midday game drive and drove via Okaukuejo to Camp Halali. Maximum speed is 60 Km/h but you can only drive at walking pace in parts. At the Rietfontein waterhole were many ibex, ostrich and zebra drinking. Two shield ravens kept an eye on us. At Camp Halali we opted for a night game drive. We were already at the camp at 16:00 and cooked ourselves first noodles with Schakalaka. At 19:00 o’clock we started in the jeep with guide Dennis. Since there was only one group with us, we had the second jeep to ourselves. The first 1.5 hours there were hardly any animals to discover. Then we were back at the waterhole from noon and suddenly two leopards stepped out of the bush. A wonderful sight under the starry sky at the water with reflection.

We have “accompanied” the two leopards still a piece and are then at 22:00 o’clock again in the camp. Dennis gave us the tip to go to the Halali Camp waterhole. We sat there until 2:00 o’clock in the night. We were quite frozen afterwards, but there was a real theatrical spectacle. A lion was “guarding” the water hole. A small jackal came running from time to time. A rhinoceros came and went again. It did not dare to drink at first because of the lion. When the lion stroked around the waterhole once and then disappeared into the bush three more rhinos and a spotted hyena came to drink. 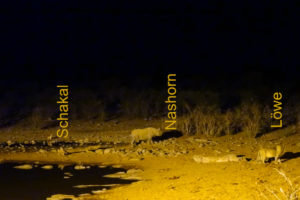