After a delicious omlet prepared by Ed, we went to Talaroa – Albatross – Colony on the opposite headland. Great weather, a bit stormy. There were many seagulls and seals there, and we saw an albatross sailing in the distance. The info center is very nicely opened and interesting. Albatrosses are really very imposing, wonderful creatures. Afterwards we drove over the mountain pass back to Dunedin. We met a few sheep that don't run away as soon as you leave the car. 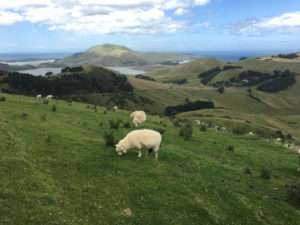 The view of the beaches and the harbour was fantastic. In Dunedin we met Janet for a coffee and then went to the Otago Museum. There is a very good department about the beginnings of settlement by the Maori more than 1000 years ago from Polynesia. Among other things, a huge canoe is on display and Greenstone jewelry. Back in Ed and Janet's house we cooked cheese chips, red lentil burgers and Black Forest cherry dessert. Ed had already prepared veggie paella, potato gratin, salad and fish. 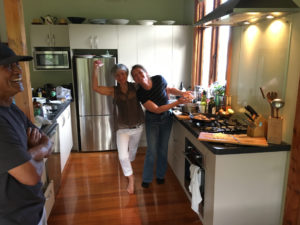 It was a great dinner again. Janet has also shown us her wonderful children's books, which she has written and for which she was even nominated for a New Zealand Award.