After a quiet night we started our drive to Maun after a refreshing cold shower and a cup of hot coffee. A few buffalo grazed in the pastures near our campground, hippos grunted and springbok hopped across the road. Since we found paw prints around our car, we asked the staff if there were any cats around. She said yes, the lions were stalking the buffalo nearby. At Southgate, a few miles away, we saw several game drive vehicles pointing the way not far away to a lion with freshly killed buffalo. 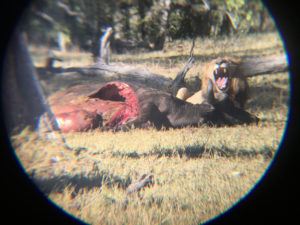 Wow. He proudly guarded his prey and after some time started to continue eating. The “king of beasts” grabbed the huge dead buffalo by the neck and dragged it a bit further. 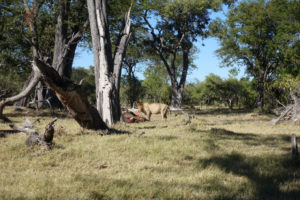 About 100 yards away was a second lion that must not have been doing well. The rangers told other tourists that the lions hunted in pairs and the one lion was probably injured by the buffalo. Wildlife pure! Since the roads outside the national park got better again, we arrived at our campsite at Old Bridge Backpackers already at 14:45. We met some very nice travelers. Claire and her son Joshua, South Africans, sleeping with their dog (and the second son, who was just on a mokoro boat tour) on a campsite further on, and traveling with a big overlander. And Chantal and Sven, two Germans we already met at Southgate, and who recommended Old Bridge to us. They are expected to finish their one year trip around the world in 2.5 weeks and we accordingly had a lot to talk about. We also had a good meal at the Old Bridge Backpackers Restaurant and sat on the terrace from where we could see hippos with baby and a big crocodile.