Today we drove to the Volcanoes National Park, which is about 30 min away by car (25 USD per car/7 days ticket). In the visitor center you can find out which parts of the park are currently open or closed. We could walk from several directions to the edge of Kilauea and see the huge crater. You pass steaming holes, lava fields, and closed roads destroyed by the eruption and earthquake. It was quite stormy and cool today. 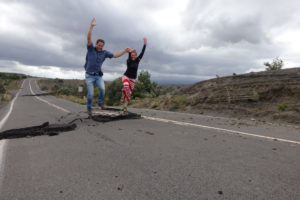 Glowing lava is nowhere to be seen. The crater is several kilometers in size and has grown a lot due to the eruption in August 2018. During the eruption 2000 people were evacuated 700 lost their homes. Our host Diana told us that only one man had to go to the hospital because of the eruption. She works at the hospital and was on duty. A lava boulder hit him and he broke his leg. The Road Chain of Craters leads through the park 16 km directly to the sea. A natural bridge has formed there. Tonight we cooked curry pan with rice and had dinner with the other guests. Ana and Fran from Argentina we had met yesterday. They got married last year and are honeymooning. Fran lost his ring while snorkeling at Twostep Beach. They are traveling back to Cordoba tomorrow. Kim is coming from South Korea and will fly on to Oahu the day after tomorrow. Diana joined them later. It was a very nice evening. 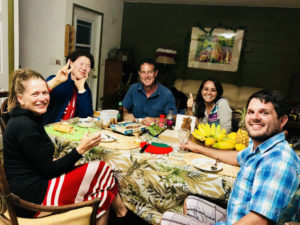