We moved to the Hotel Olinda Rio today and got a nice room with a view of Copacabana. A few hours we were at the beach at 30 degrees heat, where unfortunately the red flag was hoisted. Bathing was not allowed because of the high waves, only with the feet were allowed in the South Atlantic. But it was also great just to look at the surf. 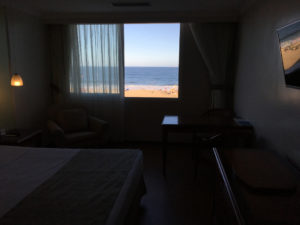 In the evening we got quiche and pancake rolls in a bakery and then went with a tour (BeaLocal) to the soccer match Flamengo (Brazil) 6 – 1 San José (Bolivia). The mood was correspondingly euphoric, Flamengo has thus risen today from 2nd place to 1st place in the South American Championsleage. 60,000 spectators were at the Estadio do Maracana predominantly in red/black for Flamengo. 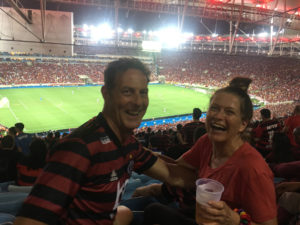 By the way, in 2014 the World Cup final Argentina 0 – 1 Germany took place here. Today we were times for Brazil. ( Tour with ticket, bus and guide 240 Reals pP)