After a breakfast of porridge and coffee, we set off at 7:45am in drizzle. Along the cliffs to Skilderkrans, a viewpoint on the rocks. 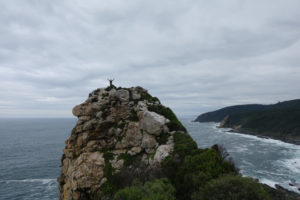 Then came the first of eleven river crossings through the Kleinbos River. On sandals through knee-deep water. We continued past Blue Bay (beautiful sandy beach cove) and up a steep 156m climb. We reached Scott Hut at 14:55, which is located directly at the mouth of the Geelhoutbos River. In the meantime the sun was shining again. We were with the feet in the Indian Ocean and went then nevertheless rather immediately (cold) shower. Afterwards we enjoyed the last sunbeams on our balcony. At each hut there is a fireplace with grate, where you can also grill. Reiner collected firewood and we made a campfire today. We were able to heat our pot of water for soup on it. 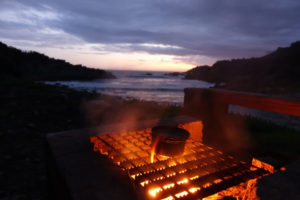 This was accompanied by a warming grog. At dusk, an otter ran along the riverbank in front of our cabin. He swam out to sea. There was also a civit scurrying around our cabin. 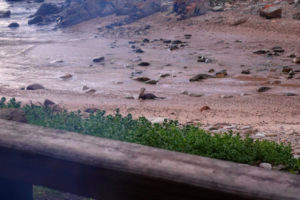