Reiner got up early and saw two whales in the bay not far from shore. I slept a little longer. Then we had a leisurely breakfast. Back on the Garden Route we drove past vineyards, mostly along the coast. Our destination today was Simon ‘s Town, where we stayed in “Romans Rock” apartment. About 1 km away is a large colony of African Penguins (Jackass Penguins), which we visited in the afternoon. The animals settled here in the 80s and one pair has become several thousand. 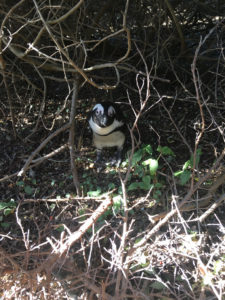 The beach section is protected via SanParks and is only open during the day. Entrance costs R 152 (approx. 10 EUR) or incl. withSouth Africa Wild Card. The colony can be observed from a wooden jetty. Some penguins prefer the bushes on the slope. (There we also discovered Dassies and Weasels). The African penguins are here all year round. 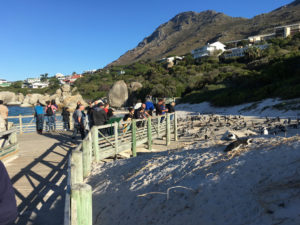 The cute bipeds are about 40 cm tall and estimated to weigh 3-4 kg. They talk loudly and waddle across the beach into and out of the water. They also stay with their offspring during the day to feed. Some young are fatter than their parents. Some nesting sites still have eggs in them, while in others some of the fledglings’ fluffy feathers had already transitioned to their shiny “tails.” 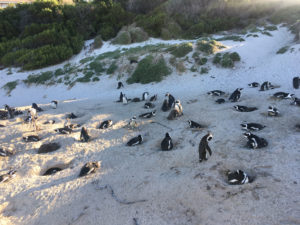 In the evening we cooked noodles in cheese sauce, played a round of Carcassonne and watched the Eurovision Song Contest over the internet.